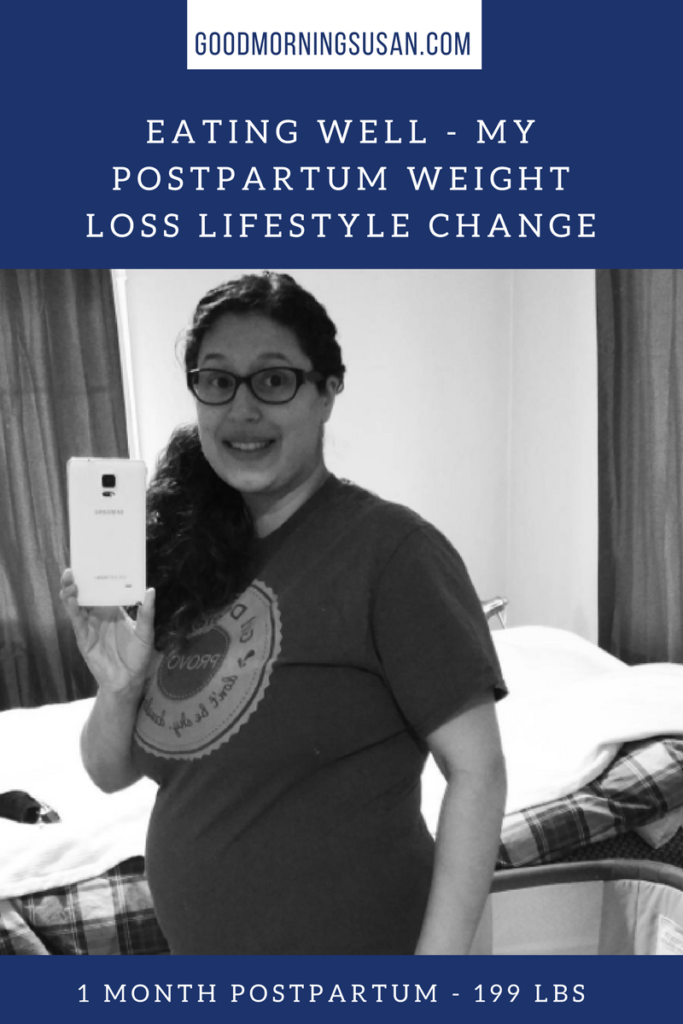 We all struggle with our weight, whether it’s losing or gaining. Getting married seemed to bump things up a notch and carrying our first baby led to some “changes” too. At 215 lbs in my hospital bed, the delivery nurse asked me how much I weighed and I kept saying “115” to which she responded, “I don’t think so.” This was probably part labor brain and mostly the fact that I had never been over 200 lbs in my life.

At 4 months postpartum today, I weigh 188.2 lbs and am steadily losing thanks to some eating changes we’ve made in our home.

Learning from the past

3 years ago after realizing I’d gained some weight during our first year of marriage I did really well at losing 10 lbs over 4-6 months, reaching 166 lbs. I remember feeling so good about myself. I got there the usual way, exercising more and eating less, but I honestly still wasn’t eating the right foods. Carbs were my staple which fill you up fast and equal a TON of calories. I’m no nutritionist but this time around I wanted to look into other options. Obviously getting some veggies in there was the right thing to do, but it wasn’t until I read this article, “How to Lose Weight Fast: 3 Simple Steps, Based on Science” that I was finally ready to take the plunge and make some changes.

According to the article above, the scientific approach to losing weight involves a diet of protein, vegetables and fat and dropping sugar and carbs altogether. Basically: Paleo + Dairy. You can read the article to learn more about why they say fat’s “ok” and thoughts on fruit, but my main takeaway was that protein boosts your metabolism and eating less carbs, lowers your insulin levels, making it easier for fat to be release from fat stores and used as energy. When we eat tons of carbs, our body burns that for energy and adds the rest to our current store of fat cells (woot!).

We’ve been making this lifestyle change as a family for about 53 days now and I’ve gone from 198 lbs to today’s 188.2 lbs. A chunk of that weight loss at the beginning was water weight – which you can read more about how that works in the article, but the rest has been a steady decrease of about 1 – 1.5 lbs a week and it’s been amazing. I haven’t even started phase 2 yet! (actually exercising) 😉 .

I’d say my favorite part of eating this way is actually feeling full and under my calories because there are no carbs in my pantry calling to me and I’m finally stocking my fridge with vegetables. On the calorie note too, you don’t actually have to count them. I just do sometimes as I’ve been tracking my journey through the free version of MyFitnessPal. When I do track, they’re always naturally low because of all the veggies. I say “naturally” because I’m literally making no effort to keep them low, just eating veggie and protein based meals. Carbs are seriously calorie hogs!

So do you not go out with friends anymore?

I will mention that our new meal plan has not made us social outcasts when it comes to food and friends 😉 we do eat carbs and sugars on the weekends and have had a few cheat meals throughout the weeks now and then (last week was my birthday and I went a little nuts). I will still try a recipe that calls for a bit of bread crumbs or a tablespoon of flour to thicken a sauce, and I love that we eat this way because it helps us to balance things, indulge now and then and it’s also diversified my recipe repertoire!

On the note of recipes – I’ve been exploring Pinterest mostly and have found myself getting into a really good habit of planning out the month’s meals and even creating grocery lists for myself ahead of time. We’ve been rating the meals too using Pinterest’s new “Try” option (good idea by the way guys!) and curating some future staples (here) as this is not a diet, but a lifestyle change – it’s important to think in those terms.

When my sister in-law asked about what we ate, I told her I’d share my lists with her – which led me to the idea, “Why don’t I just make that a regular feature on Good Morning Susan?” And so following this post I’ll start writing a weekly update on our new Low-carb/Paelo+Dairy journey, what we ate, what was yum and what was gross and what to buy if you’re down for giving it a shot too. I’ll try to include my progress in those posts as well and am curious to see how eating better will benefit my liver for the next pregnancy – in a few years 🙂 .