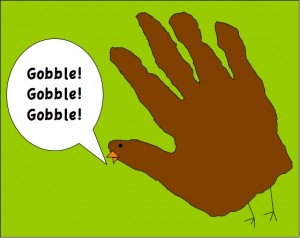 Yesterday I drew a turkey on the back of my script at work…it was one of those cute ones they teach you how to make in kindergarten with your hand and it said “Gobble! Gobble! Gobble!”  I tried to take a picture but it was dark in the studio and it didn’t turn out right…I’ll try to draw you another one though.

Tomorrow is Thanksgiving and yesterday was the first day of Thanksgiving break at BYU.  (Technically today is, but yesterday I had no classes and Kristen and I decided to party) –Partying of course meant trying to win a gift card from BYUHitlist.com for mmmm 30 minutes…and then, after discussing sauerkraut and mayonnaise, we came up with the brilliant idea of going to the movies!  We got ready and made it just in time for the 3:30pm showing of “Bourne Legacy” (at the dollar theater of course) and I’ve never been more completely satisfied with a film.  I have no idea why, but I left the theater feeling all “Rrraarrr!! That was awwesommme!” –probably the adrenaline from that sweet motorcycle chase scene.  Anyhow, I totally and completely recommend it and I’m definitely buying that one. 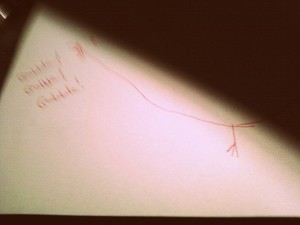 The rest of yesterday evening was spent eating pancakes and watching NaTausha play Lego Harry Potter until we got the bright idea to watch a Tinkerbell movie!!! I know, I know…this is all so silly, but the little flick was cute as can be and I’m totally showing it to my kids someday.   We ran over to the South End Market first to get some sodas and I bought a chocolate pie 🙂 After paying, Zach, the store owner and our awesome friend, said to us, “Let me guess…you guys are going home to watch Tangled?”  Hahahahahaha and Taush and I laughed and said “Yes…something like that”  because we felt so immature for watching Tinkerbell, but I don’t care, it was just as great.  It didn’t make me want to yell “Rrraarrr!!” afterwards, but it did get me in the mood for a restful good night’s sleep.

Ps: I had a dream last night that I moved into a house that was yellow and pink with flowers painted all over it.  It was down the street from this cool pizza restaurant and NaTausha’s parents had all my stuff in their car.