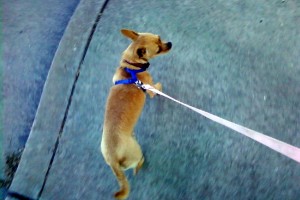 My first Spring in California smells like popcorn and looks like cherry blossoms.  March 4th may not be an official day of Spring, but this weekend was fair enough to be mistaken so.  I walked Lily this afternoon, taking advantage of a shady tree while I watched a group playing Cricket in the park.

Now there’s a lot to be said for a Cricket game Sacramento, but that’s a post for another day.  Just know that it was awesome. 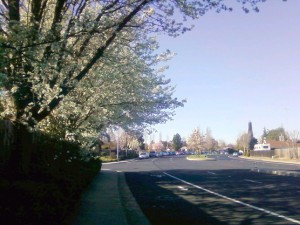 After sitting a bit, having a lovely conversation with my sister, Gina, Lily insisted we get on with the day.  So off we went, under a blue-blue sky (because one “blue” just isn’t enough) and I looked up in time to see a row of trees in bloom.  I tried to capture the moment with my cellphone, but, as they say, “it just couldn’t do it justice”.  So I invite you to come and see it sometime; but hurry, Summer will be here before you know it.